1. Queens Envied Me My Joys

2. If Not With You, My Heart is Nowhere

3. My Most Wretched Soul

Movements:
1. Queens Envied Me My Joys
2. If Not With You, My Heart is Nowhere
3. My Most Wretched Soul 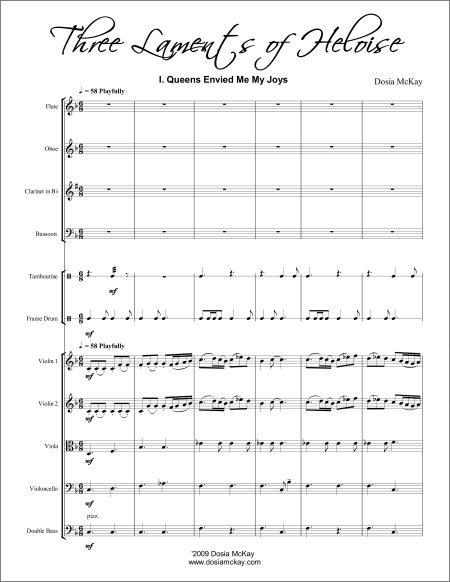 Three Laments of Heloise were inspired by the Letters of Abelard and Heloise, especially the character of Heloise, her crushing loss, self-denial, sacrifice, and forced conformity to the standards of medieval society. The first movement entitled Queens Envied Me My Joys is Heloise’s recollection of early days with Abelard. “Every wife, every young girl desired you in absence and was on fire in your presence”, writes Heloise. “The pleasures of lovers which we shared have been too sweet… They are always there before my eyes, bringing with them awakened longings…”

The second movement If Not With You, My Heart Is Nowhere, expresses Heloise’s sense of abandonment by her lover. She writes to him: “My heart was not in me but with you, and now, even more, if it is not with you it is nowhere; truly, without you I cannot exist.”

The third movement, My Most Wretched Soul, gives voice to Heloise’s continued struggle with her loss and the reality of the convent life. She does not see herself as a servant of God, but rather a hypocrite who remains pious on the outside and rages inwardly. “Of all wretched women I am the most wretched, and amongst the unhappy I am unhappiest.” “How can it be called repentance for sins, however great the mortification of the flesh, if the mind still retains the will to sin and is on fire with its old desires?”

Modal scales and dance sequences give the Laments a Renaissance feel. Music theory students might appreciate the fact that the unifying element of the three movements is the interval of the 7th which appears very frequently in melodic and harmonic gestures and creates a feeling of ambiguity and of a lack of resolution.