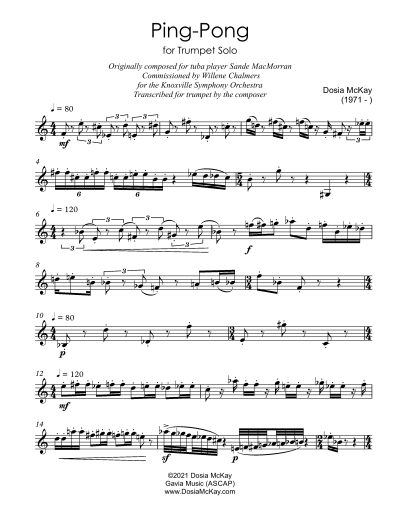 I originally composed Ping-Pong for tuba solo. The following is a trumpet transcription. Although the program note relates to the tuba version, trumpet players might find the explanation of the genesis of the music helpful.

When I first spoke with Sande MacMorran, the tuba player for whom I composed the piece, we discussed the technicalities of the instrument; its optimal range, timbre, and articulation. Sande mentioned, in passing, that the rhythm of swing music is a natural fit for the instrument and even sang a few lines to give examples.

In the following days, when I began to plan the new composition, I was surprised that the idea of playing ping-pong unexpectedly took hold of my mind and I couldn’t shake it off. At first, it seemed random and unrelated, but then, as I thought about the rhythmic patterns of the game, it all became clear.

In ping-pong, the paddle hits the ball and then the ball hits the table in a pattern reminiscent of the rhythm of swing. While beginners tend to play slower, in triplets, the professionals, much faster, with the “table note” dotted or even double-dotted. Once I realized what my subconscious was trying to tell me, I listened to (not merely watched) several videos of ping-pong matches and discovered a wealth of entertaining rhythmic patterns. Thus the idea for this miniature tuba piece was born.

While the tuba may seem a clumsy and awkward instrument, it is actually quite agile and flexible. It can perform many challenging melodic figures or quick jumps between registers, and it can certainly play ping-pong.