for Flute and Piano

Movements:
1. Anywhere But Here
2. One Regret
3. Three Moves Ahead 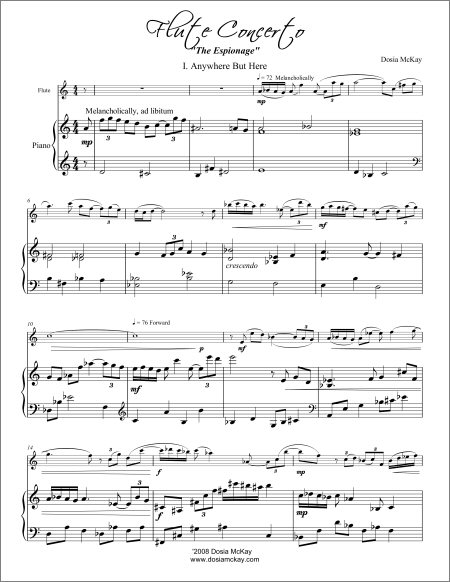 The Espionage concerto was partially inspired by a poem by the same title I wrote in 2008 (see below) and, in a wider sense, by my fascination with the spy thriller genre. I loved the Jason Bourne films with Matt Damon and Mission Impossible with Tom Cruise. Whenever there is a chase across Europe involving trains, old Volvos, period hotels with tall ceilings, crowded subway stations, and miniature coffee shops, I am completely sold. The concept of espionage, to me, from the romanticized and artistic standpoint, has little to do with the actual spying or betrayal. It’s all abut a state of mind; escapism, hiding the true self under a disguise, adapting to quickly-changing circumstances, improvisation, alienation, uncertainty, and overcoming fear. In a word, a wealth of emotional material for personal contemplation and art making.

The first two movements of the concerto, “Anywhere But Here” and “One Regret”, feature quickly shifting harmonies, lots of internal tension and emotional brooding. The third movement entitled “Three Moves Ahead” is a fast-paced chase with a healthy dose of flute virtuosity involving fast staccato passages, quick runs, and flutter tongue articulation. Once again, as in several of my previous compositions, I return to jazz and pop allusions which are scattered across various harmonic progressions and rhythmic patterns.

Samples from a live performance by Shelley Binder, flute and Judith Bible, piano, on March 29, 2009.

This time of the year in Belgrade
The satellite phone reception
Kate wanted a small wedding
Is intermittent with contradicting instructions
But her father insisted on the country club
It’s all about planning and some improvisation
He was impressed with the ivy league degree
A steady hand and relaxed breathing
She never enjoyed reading
A flawless poker face
Chattered endlessly about nothing
Moss green eyes that perceive everything
And interrogated him about his feelings
Yet reveal nothing
She always thought he was obsessive-compulsive
The meeting is in the usual place
Too nit-picking
Walk confidently but not abruptly
Why did he ask her about the front brakes?
Let them assume whatever they may
And then he left so suddenly on Monday
The key is in the glove compartment
He is so utterly boring
Of a Volvo which is parked
And completely lacks imagination
Sixty five meters from the intersection
Some men have wit and an aura of danger
Rely on gut feeling, spatial coordination and
They know what they want
Be three moves ahead of competition
And take it without hesitation
It becomes second nature
Is it too much to want a little adventure?
Always carry an extra pair of latex gloves
Maybe he has someone?
Dental floss can also do the trick
No, he couldn’t hide anything
The German passport is inside the cover
She will tell him they could try harder
Of Crime and Punishment on the second shelf
And give it more time
When exposed deny everything
Talk things through
Remove all traces of evidence
Try to remember what brought them together
Lay low for a while and
Ease up on all this travel
Resurface in Zurich by Friday
Or remodel the house
Then evaluate the difference
Or have a baby
Between real and perceived danger
Or just call it quits
When in doubt abort the mission
It’s half past midnight
The safe house has a first aid kit
And he is not going to call after all
And a one way ticket to Madrid